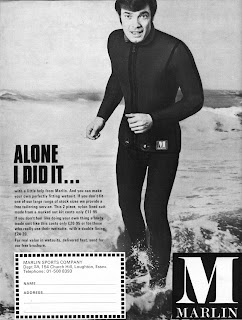 I thought this old advertisement found in a scuba diving magazine from 1972 captured an appeal to some version of a bold pioneering spirit which has been associated with "getting into the deep end" for sometime.  The imagination of countless young men intent on finding their way to the unknown reaches of the sea and back has been sparked by the possibility of being able to go it alone.

This desire for independence and adventure seems admirable, and appears to be a hard-wired human instinct, of testing oneself against the elements and emerging triumphant. Interestingly the gentleman in this advertisement is not sporting a Mo' and appears submerged in the infinite void almost up to his knees. The ad itself refers to the fact that the man has made the wetsuit he is wearing himself, but the thrill of going it alone is evident.

"Why is almost every robust boy with a robust healthy soul in him, at some time or other crazy to go to sea? Why upon your first voyage as a passenger, did you yourself feel such a mystical vibration, when first told that you and your ship were now out of sight of land? Why did the old Persians hold the sea holy? Why did the Greeks give it a separate deity, and own brother of Jove? Surely all this is not without meaning."