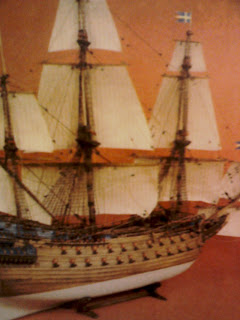 During the lead up to this show it seemed important to do some background reading, particularly epic tales of seafaring. There's a great many tales out there of solitary adventurers achieving feats of nautical navigation and confronting biblical scale challenges to their mortal selves. For this sort of thing you can't go past "Moby Dick" by Herman Melville. I'd read a graphic comic adaptation years ago from a series of classics illustrated- a glossy run of painterly quality prints done in the late 80's when the idea of the graphic novel as "a legitimate art-form" sprang to life and got heavily capitalised. Its taken 25 years but I have to say the original read is a whole different kettle of fish.

While there is a certain amount of "business" in it - waxing lyrical about chowder, jumping into bed with "savage harpooners", taxonomies of leviathan and so forth - its the grandeur of the language that never fails to impress. The frontiers that are being explored are vast and deep. I haven't actually got to the end of the book yet but its certain to conclude with epic tragedy and the folly of man.

The difficulties faced getting around the world seem considerably less these days,  it is however more difficult to find whales. Of course much of the development of seafaring technology has come not from the fact that we like soap and lamps but actually because we like to fight. In the 16th century war and the necessity to have as many cannons as possible on your boat gave rise to the development of The Galleon. The Wassa was a Swedish warship built in 1628 to bolster the glory of the then rapidly expanding Swedish empire. It wasn't quite a galleon but neither was it a Carrack. Five such ships were  commissioned by the King Gustavus Adolphus,  and The Wassa was the first off the dock. In August 1628 it set forth on its maiden voyage, sailing out of Stockholm harbour and about 2 km into its journey the Wassa capsised and
sank. A few years later as many cannons as possible were retrieved but it wasn't until 1961 that a museum was made in its honor. Despite being such an epic fail The Wassa is incredibly beautiful and the source of a great deal of national pride and income. In New Zealand we also have our own iconic shipwrecks - but thats for another day.

Interesting ain't it how often national pride coalesces around catastrophes ...